skip to main | skip to sidebar

Reflecting on who I am...what is important to me...and the gifts I offer the world, I have reorganized this PhotoSchmoozer blog into separate pages for your viewing. I am about so much...people - relationships - drums and rhythms and especially photography...and I realize that although separate, they are all so INTEGRATED into the Whole of who I am!! It's a very peaceful thought and I am thankful for the intuitive gift to see the connections and the relationships. Enjoy the journey through the blog...and WELCOME.
Contemplative photography is about being totally present and seeing exactly what is before you, without filters or judgment. It is about seeing with your heart.Doesn't everyone see what is before them? Not really. You may see a candle on a table. Do you also see the shadows it creates? Or the reflections that the light casts on it? Or it's underlying shape and form?

Sunsets Light Up the Sky - 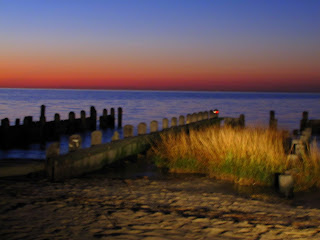 Yesterday was one of those days when it was time to distance myself from the world - to be still - walk - watch - and reflect.  For weeks I have been wanting to go to East Point Light House on the Delaware Bay and that I did.  I have been rather emotional and sitting in the sand by the water is totally soothing!  The sun's shining helped a bunch too.  At sunset, I talked to a woman who was there with her phone taking pictures - asked where she was from and she said Pitman!!  As we talked more, she remembered I took pictures of the awesome clematis she had growing in her yard!!  We talked...and talked...and were still for the 'light show'.  Then as I was about to leave and had started the car, I took one more look - the low headlights from my car just provided a magnificent lighting for the final picture of the day.  It's like the saying that tells you to take pictures and then turn around because the best one might just be there!! 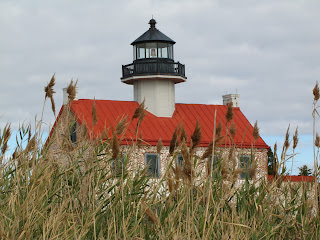 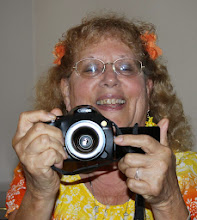 Welcome to my blog! It is special to share life's experiences with you, my readers!! Write to me anytime and let's build a relationship!! martiemol@aol.com

Bill and I are making drums - they are beautiful and sound terrific!!We will consider selling some of them, so contact us and let's talk!! martiemol@aol.com

Meet the Baby Drums: They are For Sale!!!

These are for the little ones - sit on the floor and play-alone or with someone else. Find your rhythm and have FUN!!

What fun to make Homemade Drums!

In September, 2010, I attended the Remo drum company's HealthRHYTHMS training. It was a fantastic 2 1/2 day event - learning about hand drumming and drum circles and the variety of ways that these activities are beneficial to people. Dr. Barry Bittman shared some of the exciting research that he has done that provides evidence of the benefits to participants - team building, stress reduction, FUN, spirit, communication and... Christine Stevens was our co-facilitator - an open free spirit who guided us in drum circle facilitation and then Alyssa Janney shared all of the ins and outs of the business/marketing piece for Certified HealthRHYHTMS facilitators. That I am after the training and fun...and meaningful it is. Call me to talk about scheduling a training event or a series for your friends, co-workers or community: 856-256-8380.
At the training, I talked with Roy and he shared how he had made drums (so had Julie...and a few others) They sent us info about sonotubes and how to make drums. The rest has been persistent exploration from my curious husband (with my helping hands) and then my sense of fun in decorating them!! People are beginning to ask to buy them. Why not?!? 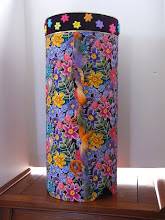 This one makes me think of Spring and all of the flowers that bloom in our garden. 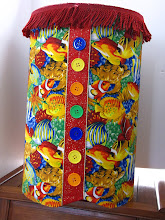 Love the colors of this fish drum!! 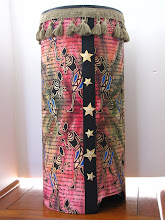 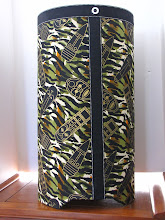 This fabric came from Africa. A guy travels there and brings it back to Sam's Fabric Outlet in the Berlin,NJ Farmer's market 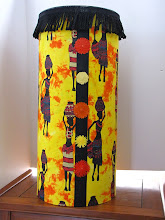 The colors on this drum are so vivid! I am definitely attracted to BRIGHT!! 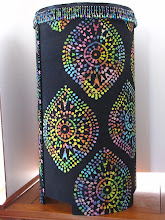 This one is Anne Marie's favorite. She calls it the Hippie Drum with the batik fabric and the beads. 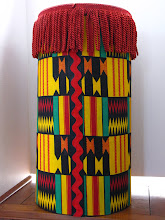 Another of the fabrics that have come to Sam's from Africa. I love the vibrancy of the colors I use on the drums!! 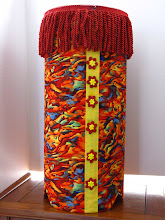 I love the vibrancy of this drum - looks like flamesand the buttons just pop out to add just a bit more color!!

Welcome Each Day With a Sense of Purpose!! I have been reading several interesting books on Aging: lessons from other cultures - The Blue Zone and Healthy at 100 by John Robbins. Each tells how important it is to wake up each day with a sense of purpose. When I saw this at the Rt. 13 Flea Market in DE recently, I knew this was a SYNCHRONICITY and a message to share with my friends all over the world! Take it to heart and ENJOY!!